Jacob Tierney
A Letterkenny Christmas: The Three Wise Men is the Christmas holiday special released between Seasons 5 and 6 of Letterkenny.

The Hicks throw a Christmas party.

A cartoon animation of Wayne, Dan, Katy, and Daryl shows them throwing snowballs outside the back porch of the farmhouse. 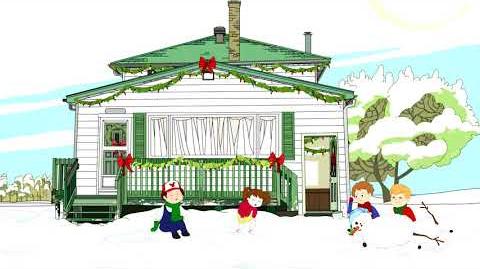 Katy sets down a box of Christmas movie DVDs, and she, Dan, and Daryl are pleased that for once, there will be no holiday humbug, for even Wayne declares

I, to the fuckin'…
… Love Christmas — Wayne and Katy

It is Christmas Eve, and Daryl suggests a round of beers, but Wayne nixes the idea: Christmas drinks only, as is tradition, and you don't fuck with tradition. Katy uncovers the box to reveal butter ripple schnapps, blue curaçao, and crème de menthe. Daryl suggests they could mix them up into "jingle juice," but jingle juice makes you spit, and Wayne wants everything to stay classy until midnight for the main event: a shot of Irish whisky, a shot of American whiskey, and a shot of Canadian rye whisky, a series which they call "The Three Wise Men." Wayne asks

Wayne asks whether "Is there any talk of maybe this being, uh, best Christmas party ever?" The others say that they have heard rumors to the same, pleasing him.

The party gets underway: Dan, Glen, Roald, Stewart, and Daryl drink in the dining room, and in the kitchen are found Katy, Jonesy, Tanis, Reilly, Gail, and the Coach. The conversations are indistinct but the facial expressions reveal a universally negative opinion of the drink options.

Wayne invites Bonnie McMurray to the living room and gives her a gift: a disposable film camera, to capture the evening's festivities. She offers to be his "helper elf"; he declines even though she is dressed for the part.

At 8:00pm, the sole bathroom is already occupied with someone puking, sending Daryl outside. A very drunk Roald tries to kiss Stewart under the mistletoe, and falls over. In the living room, Wayne gives the Coach the gift, as per tradition, of a chimney cleaning log. Coach is touched, saying it reminds him of Christmas traditions with his late wife Barb, making love for hours in front of the fire. He shares that he misses the touch of a lover, and laments how hard it is to find someone who was her equals. He proceeds to describe her body, and what she would do physically when they were intimate, to Wayne's increasing discomfort. Wayne desperately calls for Bonnie, and tells her he may need a helper elf after all.

As Dan is locked out of the bathroom, and forced to go outside, Wayne presents Tanis with a gift, even though she says the evening is "the salliest Christmas party ever." She is touched, but can't open it because her nails aren't dry. It is an apron that says "Why you all up in my grill," which Tanis takes to be sexist but which Wayne intended to be complimentary of her cooking skills, and a warning to men who want to second-guess her. Bonnie, jealous of the attention, snaps an unflattering candid.

Gail lambasts the person puking in the bathroom. Katy suggests they watch the 1964 top-animation classic Rudolph the Red-Nosed Reindeer, but Tanis demurs, saying Santa was a dick in that movie, and Roald and Stewart that he was racist. Katy defends it by saying it was a different time, which ignites a backlash. Daryl, passing by, hates that the elf's biggest dream was to become a dentist.

Pull your finger out of your ass, you fuckin' elf. — Daryl

Wayne calls Gail into the living room to give her a gift: a framed photograph of Uncle Eddie. This thrills her, and she gyrates with it erotically. Wayne wishes she would stop calling him Uncle, since he wasn't her uncle.

As the clock strikes 11pm, Stewart nearly gags on his own "jingle juice." Glen encourages Wayne to take up the didg, but Wayne declines. Glen is disappointed because the church elders hired an outside preacher to give the Christmas sermon instead of him, and delivers some excerpts for Wayne. Wayne gives him his gift: a pitch pipe to use for the Salty Treats, but Glen says they have broken up, and does not understand its purpose since he is blessed with perfect pitch.

Jonesy comes out of the bathroom after having a spit; Reilly says he is in the mood for one as well. Wayne calls them in for their gift: a photo collage of the Letterkenny Shamrockettes season, in appreciation for the victory bringing the community together. They are, for once, left completely speechless. They remark on the spirit of the season, which to them is of college and university girls returning to town disappointed that their high expectations have not been met, and seeking the comfort and solace of their hometown, and the hockey players then having sex with them.

It was really special, when I took her down. — Jonesy

Katy proposes watching Home Alone to Gail and the Coach. Coach says he often shows it to his players as a meditation on pain—those burglars should have been killed a hundred times, but they persist. Stewart criticizes the realism of the film. Daryl reflectd that there was no point to robbing the McAllisters, and so the burglars must just have hated themselves; Dan agrees, saying they just wanted to die.

Katy then proposes The Santa Clause starring Tim Allen. Stewart and Roald point out various plot holes, such as the possibility of the Santa suit being worn by a serial killer. They ruminate on what kind of Santa various serial killers would have been when Wayne calls the Skids in for their gift. They denounce consumerism and say they do not want a gift; when Wayne asks "what if it's drugs?" Roald changes his mind. He has given them of a bottle of vitamin D, concerned about the lack of sunlight in their basement.

Wayne calls in the Hicks for their gifts: a pencil case for Dan for Professor Tricia's women's studies class, and cologne for Daryl. Wayne notes that Banana Boat will not be enough to mask the smell of his barn clothes, but points out that Daryl not wearing his barn clothes every damn place would be a fruitful choice. For Katy, he has gotten The Reindeer Effect, a bootleg Korean film sent by his friend Teddy Kim. No one has seen it, so all agree to put it on.

All agree this is the best Christmas party ever. They clock strikes midnight, and they celebrate the Three Wise Men, but are chagrined.

Wayne and the hockey players

Gail, the Coach, and Katy

Gail and her gift, a picture of Uncle Eddie

Wayne with Roald and Stewart

Wayne and the Coach