watch 01:29
Wiki Targeted (Entertainment)
Do you like this video?
Play Sound

Jacob Tierney
The Ol' College Try is the second episode of Season 5 of Letterkenny.

Wayne tries on a new relationship. The Skids get deeper into the Dark Web. The Hockey Players meet their new team.

Wayne interjects to complain about how LA people are always talking about tacos. The others agree, and Daryl complains about them talking about hiking as well.

Katy pronounces it *ellaaay*, and the others mock the accent as well, and all complain relentlessly about the vapidity of conversations with people from L.A. Dan pauses to ask who anyone knows who's ever beens to LA?

What's this about LA? — Reilly, eating a taco

Dan, Katy, and Daryl are playing cribbage in the farmhouse. Wayne buttons his top button as he preparing to go out with Tanis. The others ask if he finds her a little "rough around the edges," her "soil a bit rocky," "her grain a little bit rough for the layin'." Wayne replies there is only one way to find out.

Jonesy and Reilly prepare to enter the hockey arena to show off their gains from all their off-season and pre-season reps to their teammates and to the Coach. Coach interrupts them to say he doesn't see any gains—but it doesn't matter, because the team has folded, because there weren't enough bodies, because it was Senior A whaleshit hockey. He suggests they have three options: play in the next town, retire, or join another team— as coaches— with him. 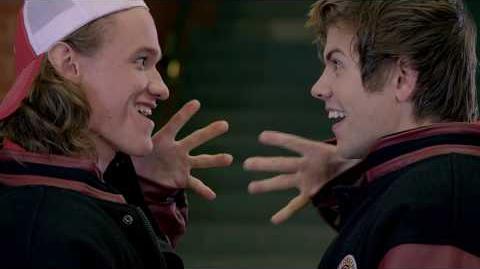 The team has already won back-to-back 'ships, and as they have never won a 'ship before, Reilly and Jonesy get pumped up to win back-to-back-to-back boats. They run off before the coach can warn them they'll need an icebreaker when meeting the team: the Letterkenny Shamrockettes.

Wayne drives up to Tanis' house on the Rez; she spits loudly, startling him. He doesn't say what girls should do, but Tanis presses that he doesn't like it when girls spit.

Preferably not within my line of sight, earshot, and in a perfect world, ever. — Wayne

Tanis spits again, then invites him inside for a meal.

Stewart paces the floor of the basement, waiting. Roald says he has called but the calls go straight to voicemail. Stewart admits that he has no control, and may have a problem. They are interrupted by Everett, clutching a bag he wants to exchange for meth—a bag containing a computer they can use to access the Dark Web.

Everett brings the computer to Stewart's standup desk and demonstrates it. Stewart cannot conceal his excitement about the possibilities to conduct illegal activities. The first site they bring up describes how to cook human meat. As they start to browse, however, they are interrupted by a call from the Hard Right. Stewart wants to ignore the call, but Roald notes that they should be making cool new friends on the Dark Web.

Back at Tanis's house, Wayne sits to remove his boots, startling Tanis because he has crossed his legs. He tells her the less bending over a man does, the better, which sounds homophobic to her, and chiropractic to him. She tells him she swings both ways, and would be open to Wayne inviting another girl— or guy— to join them.

Back in the basement, Everett and the Skids answer the call from Hard Right Jay, telling him they were about to enjoy some Dark Web literature. Jay tells them one hundred percent of humans— the ones on earth, anyway— are cannibals, going back to the Irish potato famine of the 1840s when "thousands of those godless, heathen bogtrotters" migrated to North America.

He points out that when McDonald's opened its first location in 1955, not a single cow was photographed, yet they were serving burgers, and now McDonald's was openly boasting of serving over 999 billion. He praises Donald Trump for, in 16 of his first 100 days in office, of bringing the number from 100 percent down to 13. The conversation has gone on for an hour, however, and Stewart has grown impatient.

Tanis burps loudly after her meal, distressing Wayne again. He tells her he does not like it, because it is unbecoming. She objects that men should not tell women what to do.

Meanwhile at the arena, Coach warns Reilly and Jonesy that their new team has a bit of an attitude problem despite their success, and a rivalry for leadership. They charge in and are shocked to find themselves in the women's dressing room. They apologize for not realizing the boys were ladies. Betty-Anne chirps that it isn't a shelter, even though Mary-Anne looks homeless. Mary-Anne replies that it isn't a church, even though Betty-Anne's mitt looks like the back of Christ's head. They continue insulting each other, to the boys' bewilderment.

Wayne and Tanis sit outside by the fire, and Tanis teases him about his turtleneck. They acknowledge that a woman should be with a man she finds desirable, and vice versa, and that they are too different to have a long-term relationship. In the short term, however—like a night—Tanis has not done all the things she had wanted to do. Wayne notes they talked, ate, and sat by the fire, and agrees to stay for the other thing, and they return to the house.

Wayne returns to the farm the next morning; the others are still playing cribbage. He reports that except for the end, the evening had gone so fuckin' poorly. They tell him he has missed taco night— not just any taco night, but an "LA" taco night. They continue to mock people from LA, LA, LA, LA.

That's what I say, I said pull your finger out of your ass. — Wayne

According to Tunefind, the following songs are featured on this episode:

A drink at the Ukrainian Centre

Mary-Anne has an observation

Making friends on the Dark Web

But in the short term…
Add a photo to this gallery
Retrieved from "https://letterkenny.fandom.com/wiki/The_Ol%27_College_Try?oldid=4494"
Community content is available under CC-BY-SA unless otherwise noted.