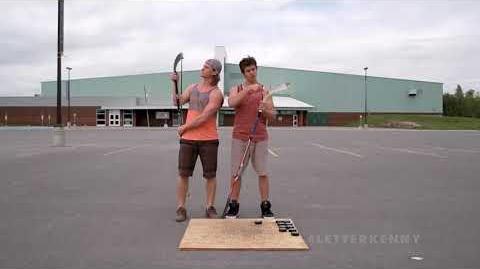 It was broadcast on The Comedy Network later in 2016. A Region 1 DVD distributed by Universal Studios Home Entertainment was released on November 21, 2017.

Hulu acquired distribution rights for the United States on June 6, 2018 in a deal executed by DHX Media. Seasons 1 and 2 were released on Hulu on July 13, 2018.

Bell Media announced development of the series on November 15, 2013, based on the YouTube sensation Letterkenny Problems, with Jared Keeso, Mark Montefiore and Patrick O'Sullivan of New Metric Media, and Ben Nemtin attached (BellMedia). Letterkenny was the first original series commissioned by Crave, and the first by any Canadian video service.

Production began in and around Sudbury, Ontario in May 2015, with filming concluded by the end of June (Toronto Star). The release date of February 7 was announced on November 9, 2015. The two-minute cold open for the first episode was released as a teaser on YouTube on December 17, 2015.