watch 01:29
Wiki Targeted (Entertainment)
Do you like this video?
Play Sound

Ain't No Reason to Get Excited
Roald is a supporting character on Letterkenny, appearing in Seasons 1 through 8. He is played by Evan Stern.

Roald is a member of the Skids, the group of outcasts led by Stewart, who spend most of their time making and doing drugs and playing videogames in their basement, committing petty theft and vandalism around town, or dancing in the dollar store parking lot. After the departure of Devon, he becomes Stewart's sidekick and de facto second-in-command.

When first seen, Roald and the Skids accost Wayne in the parking lot of MoDean's. He joins in their taunting of him for using Tinder and Grindr, although being gay he admits it makes him uncomfortable; Stewart and Devon voice their support of him, however ("Ain't No Reason to Get Excited").

Roald remains loyal to Devon during the latter's differences with Stewart over the continuation of the meth business ("Rave") and the latter's relationship with Katy ("A Fuss at the Ag Hall"). Neither hold grudges against the other when Stewart resumes his position at the head of the group, however.

After Devon's disappearance, Roald became the most prominent Skid after Stewart, and is frequently seen by his side. He visits Stewart and Gae in the city and helps make and sell green-tinted GHB to club-goers. Concerned Stewart will relapse with proximity to drugs, however, Roald convinces (with Katy's help) the Hicks to come to the city to bring him back to Letterkenny, which they subsequently do.

Roald has a poor relationship with his parents, who do not accept his sexuality, despite naming him after the author of Charlie and the Chocolate Factory (Roald Dahl). In an overheard telephone conversation with his father, he is heard to say he is "still a homo" ("MoDeans 2").

Roald is young, hirsute, and slender. His face has sharp features, partly covered by a beard and a red bandana he wears as a headband. Like the other Skids, he dresses most often in a white tank top, black overalls, and boots. 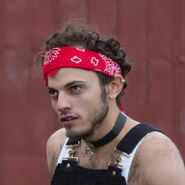 Add a photo to this gallery

Retrieved from "https://letterkenny.fandom.com/wiki/Roald?oldid=3603"
Community content is available under CC-BY-SA unless otherwise noted.