Jacob Tierney
Rave is the fifth episode of Season 1 of Letterkenny.

Daryl comes up with the idea to start a pest removal business while Stewart decides to become a superstar DJ and host his own rave. 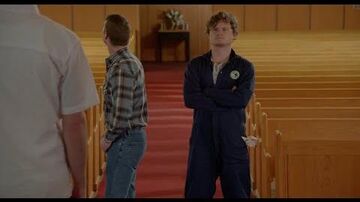 Bit of fuss down at the church the other day… — Wayne

Wayne and Daryl come down to the church. A pants-less Glen asks them to remove a rodent nesting below the organ. Wayne determines that it is a possum, and would "rather reach into a pirate hooker's chamber pot" than deal with it. Daryl "always had a skilled hand at wrangling vermin," and gets that hand bitten.

You wish there was a pied piper for possums, but there isn't, so you're gonna have to keep just pickin' 'em off with a .22. Buckle up, 'cause they're fuckin' ugly…. 'Course that's not to say I have it all my damn self. — Wayne

Daryl is sick at the kitchen table from his possum bite. Wayne will be busy preparing for the Jamboree, so Katy agrees to take Daryl to the clinic.

Waiting for their ride to the Rez, Jonesy notices that two Shamrocks rookies, Deetsy and Burnsy, are missing. Reilly diagnoses them with a case of the "native flu," i.e. calling in sick to avoid tangling with the Natives, who are "tough as hell."

Wayne goes to the dollar store to buy ice for the jamboree. Bonnie McMurray flirts with him instead of ringing up his purchases; he tries to check himself out, but she tells him to just take the ice without paying.

Katy, Daryl in tow, encounters into Stewart on the steps of the clinic. She tells him she used to be impressed by his music when she was a teenager, and is disappointed to see him addled with drugs.

At the Ag Hall, Wayne delivers the ice to McMurray. McMurray is keenly interested to pair up Bonnie and Wayne, but Wayne is more skeptical.

McMurray calls Wayne to tell him the jamboree is canceled, as Stewart is renting out the Ag Hall for the entire week. Wayne objects that agricultural halls are for agricultural music, but then Daryl calls asking for a ride form the clinic.

Daryl thinks he may have rabies, but has also been inspired to start a pest removal business. Wayne plans to wrangle as many possums as they can and let them loose at the rave to sabotage it. For advertising, they'll post about it on their fuckin' Facebook.

At the Rez, Tanis, Axe, and Slash tell Reilly and Jonesy that Letterkenny has gone to meth. They exchange chirps. The rookie vomits.

Devon calls Stewart to say that they are missing $2000. Stewart has taken it for rave expenses, which displeases Devon and Roald.

Gail saw the ad for Wayne and Daryl's pest removal service on Facebook, and asks them to remove a skunk from MoDean's. Daryl asks Wayne to take care of it.

Devon, angered by the collapse of the the Skids' meth business, proposes they sabotage Stewart's rave. They decide to spread the rumour that the Ag Hall has asbestos.

Stewart visits Katy at the farmhouse to invite her to the rave personally, and assures her she will be accommodated despite the large crowd he predicts. Wayne comes over to complain about the rave being held at the Ag Hall, and chases him off the property.

Back at the hockey arena, a beaten-up Reilly and Jonesy are angered about Letterkenny being labeled a meth town, and they plot revenge against Stewart. The Coach, angered by their performance at the game, tells them they will have practice at 6am.

On the night of the rave, Stewart gives himself a psych-up talk in the bathroom, then walks out to make a triumphal entry—to an almost-empty Ag Hall. Only Bonnie, Katy, and hired security are present. Wayne enters with his captured animals, but finding the place empty, takes them back out. He is accosted in the parking lot by the hockey players, who are looking for Stewart. They prepare to scrap, but the Coach arrives just then and dismisses the team.

A demoralized Stewart returns to the basement. The other Skids cower as he inspects their product and deems it a "grotesquery." They are enthused, however, to hear that the DJ project is off. Instead, they will make Letterkenny the biggest meth town in the whole country.

According to Tunefind, the following songs are featured in this episode:

Wayne and Daryl arrive at the church

Katy comes to the barn

Shamrocks at the Rez

That's not what the poster says
Community content is available under CC-BY-SA unless otherwise noted.
Advertisement