Never Work a Day in Your Life

Never Work a Day in Your Life

Jacob Tierney
Never Work a Day in Your Life is the first episode of Season 4 of Letterkenny.

It’s Gail’s birthday but in an effort to forget Rosie, Wayne is non-stop chorin’. 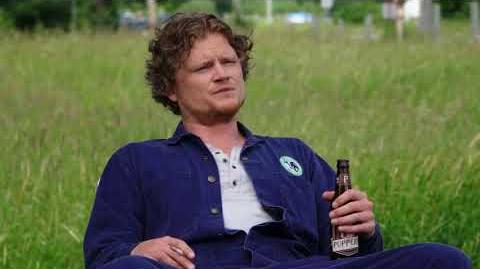 The Hicks, the hockey players, Stewart, Glen, and Gail summarize their respective predicaments in limericks.

Well, you're not really sure as what went down.
But you hears you look like a real clown.
Your pal had a scrap
like a real proper snap.
And since he's been wearing a frown. — Dan

A montage shows life in Letterkenny in the two months since the fight and Wayne and Rosie's subsequent breakup: Wayne chorin' non-stop, the Skids doing copious drugs, Jonesy working out by himself, Gail cleaning up MoDean's, Glen street preaching at the dollar store, Rosie reading by herself, Stormy again refusing to come out of the barn. At MoDean's, an argument between Jivin' Pete and Daryl develops into a donnybrook with Dan, Jim Dickens, Tyson, Sled Ted, Joint Boy. The degens are defeated and the Hicks take their leave as Gail consoles herself by doing shots alone at the bar.

Back at the farm, the Hicks discuss their plans to attend Gail's birthday party at MoDean's II; Wayne says he has too much chorin' to do. Dan and Daryl observe, to be faaair, that he may be trying to escape his feelings over his breakup with Rosie, as his work seems neverending; Wayne states that if you do what you love, you'll never work a day in your life.

Reilly drives up to the end of the laneway by himself and greets the Hicks. They respond with a stream of insults that leave him speechless until Katy calls him into the house.

Jonesy is lifting weights by himself at the gym when he attracts the notice of two gym rats (Ron and Dax), who catcall him with various hockey-related double entendres. "No penalty for hair-pullin' in this game," Dax points out. Jonesy mutters that he misses his buddy; they each offer to be his "buddy."

Dan is passed out exhausted at the kitchen table, as Wayne and Daryl report on the amount of work they have been doing. Katy reports that Stormy, Wayne's German shepherd, would not come out of the barn for breakfast. She adds that the only other dog Stormy had ever taken to was Rosie's dog Cito. All remark on their adorable litter of pups as well. But Wayne gives a hard no when Katy offers to call Rosie over; Wayne says he is "too busy," and that they should get back to chorin', yielding a "nooooo" from the other Hicks.

Jonesy and Reilly run into each other in the dollar store parking lot, but the conversation is awkward and forced. Reilly complains about Katy, but then feeling bad about Jonesy's exclusion, loudly asserts how good his life is, as does Jonesy. Glen and the Skids arrive at the same time. Glen wants to street preach from the parking lot, whereas the Skids want to use the lot to do rips, and the hockey players just want to do reps. They argue about doing rips, reps, and revelations, until Bonnie McMurray exits the store to tell them she has called the police.

At the farmhouse porch, Katy again lectures Wayne about taking a break—he is brushing his dog Gus, who is a short-haired breed. He is defensive.

You know, you don't need to watch me brush him twice a day. Get a hobby. Get a kite. — Wayne

Daryl complains that it is a lot of work, and Wayne replies that if you do what you love, you'll never work a day in your life, before leaving with Gus. Dan and Daryl discuss what they would do if they never had to work another day in their life; they agree that they'd "mix more batch than Betty Crocker." They reflect that they've spent so much time working on the farm that they haven't in some time. Daryl suddenly remembers that there is a "matinee game" for… "ball." Dan catches his drift, and both depart.

Katy arrives at MoDean's, where Rosie is in town also visiting for Gail's birthday. Katy remarks about Stormy, and Rosie reports that Cito similarly hasn't been himself; dogs ar a lot of work—but do what you love, and you'll never work a day in your life.. Gail remarks that if she never had to work another day in her life, she would "diddle my Skittle… till she spittles," in various terms, until Katy takes her leave.

At the farm, Dan and Daryl again try to get Wayne to come out for Gail's birthday, but he refuses. He has had the vet come by to check up on Stormy, giving her a "two-knuckler." Katy arrives and says vet said Stormy might be depressed. Wayne scoffs at the idea that dogs can be depressed, and Katy points out that he and Stormy would make a fine pair of poopy pants, except that if Stormy could talk, she would tell them what's wrong Seth arrives to take them to the party, and Wayne is left by himself.

Reilly is working out alone at the gym when Ron and Dax approach, catcalling him with a new stream of hockey-related double entendres.

Reilly is bewildered, and mutters that he misses his buddy. Ron and Dax each offer to be his buddy.

Wayne, seeing Stormy alone in the barn, makes a call.

Glen is preaching at the dollar store parking lot when Stewart and the Skids ride up on their bicycles to challenge him. They agree to have a battle to decide who will have use of the parking lot.

Rosie arrives at the farm with Cito, and Wayne walks over to greet her. They discuss the events from two months ago when Bradley calls from the party to ask why they are not there. Bradley says he has no problem with Wayne, and respects him as "good ol' boys are a dying breed"; Wayne and Rosie realize their dispute has no basis. Stormy comes out of the barn to greet Cito.

At the party, Glen and Stewart exchange scowls, and Reilly and Jonesy have another awkward meetup. Daryl and Dan toast the birthday gal. A reconciled Wayne and Rosie show up at the bar, where they are greeted warmly by Bradley. Relationships are hard work, Wayne says, but do what you love, says Rosie, and you'll never work a day in your life.

According to Tunefind, these songs are featured in the episode:

Hard to be smiley

Wayne on his mind

Wayne gets a lecture

On the phone with Bradley