Jacob Tierney
This article is about the episode. For the location, see MoDean's

MoDeans 2 is the third episode of Season 3 of Letterkenny.

You're chorin' with your pals the other day… — Wayne

Katy needs to borrow Wayne's truck to take Kingsley and Shep back to the city, which he is happy to oblige. Gail has asked the Hicks to come early for the opening of MoDean's II to help set up. Daryl says they will need to pick up some kegs from Jivin' Pete, but Wayne is no longer on speaking terms with him, because of his treatment of Katy. Dan acknowledges that "Jivin's not really a goods guy any more," having been hanging out with degens from upcountry.

The Skids, having unmasked the clown-costumed assailant to find a girl instead of Devon, interrogate her. After some crossed communications, they eventually determine her name is Gae.

That's your name? Wow. And I thought Roald's parents never gave him a chance. — Stewart

She explains the source of her "vexatious streak": her parents have exiled her to live with her aunt in Letterkenny for misbehaving.

With Angie no longer in the picture for the Letterkenny Irish, Reilly and Jonesy set about working the team towards getting a W, by winning the mental game. Reilly avers the "easiest way to get inside your opponent's head, boys, is chirping from the bench," but they retort that "talk is for schmelts." They are interrupted by Coach, who introduces a new teammate: Shoresy. Shoresy immediately chirps at Reilly and Jonesy about their mothers, driving them away on the verge of tears.

My mom would never put a finger in your bum! — Reilly

Back at the bar, Gail has a shot with the Hicks to thank them for delivering the kegs. She introduces two new waitresses: Bonnie McMurray and Glen, who has had a makeover and LASIK surgery. She observes that Jivin' Pete has "turned into a bit of a tit," but Wayne admonishes her that "bad gas travels fast in a small town."

Daryl remembers incidents involving Jivin' Pete and Alexander. The group discuss whether it would be preferable to have a bit of pee in the mouth or poop up the nose for the rest of your life. There is no consensus.

Stewart interrogates Gae about Devon. Roald demands an explanation for her clown costume; Gae replies that clowns are invoking terror all around the continent. She seeks asylum because she hates her parents, she hates the world, and she hates herself. She intends to misbehave so bad in Letterkenny that her parents send her back to the big city, a project the Skids sign on to.

Reilly and Jonesy do a practice chirp session in the locker room, but the team is slow to start. They hold out hope that the boys will get the mental W, allowing them to get the scoreboard W.

Back at MoDean's II, Wayne is shoveling snow as Jivin' Pete failed to show up with the sidewalk plow. Daryl makes disparaging comments about Jivin' and his friends, which Wayne again criticizes as dishonorable. The conversation turns to whether one would rather have a penis for a nose or vagina for a mouth.

Stewart announces the formation of a new collective: Freaks Acting Krazy United (F.A.K.U.). The group dresses in clown costumes and set about on a campaign of mayhem: egging, vandalism, smashing mailboxes.

At the game against the Caribou, Reilly and Jonesy get the rest of the players to chirp on the topic of "skate." They improve quickly, and while they lose the game, the activity brings the whole team together.

Outside MoDean's II, Jivin' Pete and his degens confront the Hicks. Wayne acknowledges that he made disparaging comments about them, and is embarrassed it got to them via someone else. He then repeats the comments directly to his face:

I think you're full of shit and you and your pals think so much of yourselves you probably suck each other off. — Wayne

The group have a scrap. Wayne knocks Jivin' Pete down, makes him apologize to Katy, and makes him promise to treat girls better.

Afterwards, the group returns to the bar for a drink and to dance. The crowd includes Reilly and Jonesy, Tyson and Joint Boy, and Rosie.

There are eight songs played in this episode according to Tunefind:

The farm in winter

Back to the city 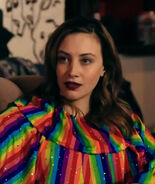 My name is Gae 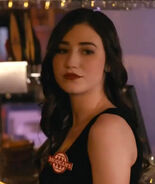 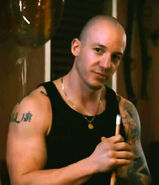 Tyson at the table

Pete's not a good guy
Community content is available under CC-BY-SA unless otherwise noted.
Advertisement