Jacob Tierney
Letterkenny Spelling Bee is the fourth episode of Season 5 of Letterkenny. 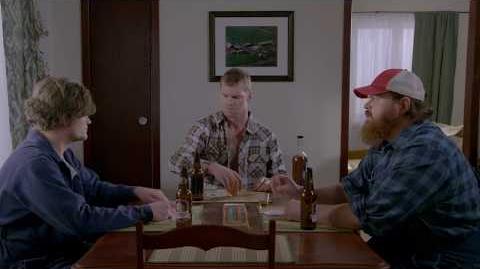 Daryl, seated at the bar at the Ukrainian Centre, is insistent he would win, but Dan and Wayne scoff at this. Bonnie McMurray enters, and they say they are glad she has been able to pick up shifts since MoDean's II burned down. She points out, however, that the place could run on the honour system if it wanted. Daryl asks her and Katy who would win in a fight between him and Dan, and they both say Dan as well.

Katy asks why they don't arm wrestle to settle the issue, but Wayne says arm wrestling is not a legitimate barometer for strength, and certainly not toughness. Bonnie suggests they leg wrestle, but Wayne says if they're on the floor rubbing their legs together, they've both lost. Wayne says they have no choice but to fight; Dan is willing, which Wayne says makes him a good friend.

Tyson and Joint Boy enter, and are also asked whether Dan or Daryl would win. Tyson is decisively for Daryl, given his advantage in reach, speed, and willingness to make a nut shot or a hair pull. Joint Boy favors Squirrely Dan, because he's squirrely. Bonnie asks them who would win in a fight against each other, and each responds that it would be himself. Each accepting this as a challenge, they walk up to each other to fight, but knock each other out with a head butt.

Daryl, Wayne, and Dan are playing cribbage back at the farm. Dan reports zero, the same as 19 would be; as 19 is impossible in cribbage, the group sing "Do Re Mi, nineteen, go fuck yourself." Wayne notes that the weather has gotten much colder, down to about 10 Neil deGrasse Tysons.

Daryl asks where Katy is, and Wayne and Dan are taken aback. They express their shock quoting lyrics from various songs by Canadian recording artists. Daryl remembers and is regretful he forgot: she is preparing for the Letterkenny Adult Spelling Bee. All become extremely emotional. Katy had been champion nine years running, until Stewart defeated her last year.

Like, she forgot a silent E. Completely out of character for her. Do you wanna know what? That silent E may follow her around for the rest of her life. — Wayne

They decry Stewart "spelling out of his league," saying his kind of spelling will catch up to him one day. Wayne issues a warning to Stewart that he will spell against him any day of the week, ripping open his shirt in anger. The three of them pledge to work around the clock to ensure Katy spells at her full potential, and do a shot of Gus N' Bru to seal the pact.

Reilly and Jonesy announce themselves and enter the Letterkenny Shamrockettes dressing room at the hockey arena. Reilly begins to make a speech to the "girls," but Betty-Anne objects strongly to the term.

Mary-Anne over there is not a girl. When's the last time you saw a girl's tits sag so low, she could tuck 'em into her joggers? — Betty-Anne

Jonesy suggests they say "ladies" instead, but this is no better.

Betty-Anne's no lady. She picks and flicks more boogers than a restless Dutch eight-year-old with Asperger's — Mary-Anne

As the women lay into each other, the Coach calls Jonesy and Reilly outside. He starts to tell them the temperature has cooled to about 10 Degrassi Junior Highs, but soon gets to the point. He is used to being embarrassed by them, but he has only been humiliated by their spelling. They remind him that they have said they are dogshit spellers from the get-go.

The Coach brushes this off, and tells them that because he has money on the bee this year, he has done some "tinkering" behind the scenes, laughing maniacally.

As Katy comes downstairs, the other Hicks are gathered at the kitchen table. Daryl has made her a protein smoothie containing 13 almonds, and hope she is not triskaidekaphobic, i.e. afraid of the number 13, if she is not familiar with the term. Katy replies that she is quite familiar, as "triskaidekaphobia" is one of the most commonly used words in spelling bee.

They are all doing activities to promote brain function. Daryl is playing sudoku, as number puzzles and games increase the neuroplasticity within the brain. Dan is lifting weights, because exercise allows the brain to take on BDNF proteins, helping with focus, concentration, and memory. Wayne is playing guitar, because playing an instrument strengthens the corpus callosum. He demonstrates with a badly executed G chord. Katy says she has just come down for a beer, to their horror. They admit they are worried about her going into this year's spelling bee, and are just trying to support her and keep her hydrated.

Oh, I'll be plenty hydrated while I'm drinking champagne out of my tenth title trophy. — Katy

Stewart, dressed in his DJ costume, is giving himself a psych-up speech in the mirror. Roald tells him to bring a jacket, as the temperature has cooled down to 10 the-grass-is-always-greener-on-the-other-sides. Four women—Jonesy and Reilly's old "big city slams" and the two gym babes—are waiting for him in the basement, arguing over who will get to double the champ on his bike to and from the competition. They agree that two will double him on the way there, and the other two will double him on the way back.

The Hicks are also preparing to leave for the Bee, and give Katy a briefing on the competition. They warn that Stewart has been training with Dark Web spellers, and that Joint Boy is a pretty good speller when he's stoned. Reilly and Jonesy can't spell for shit, but McMurray has been known for spelling dirty. Dan tells her they know she spells mean, but think she could spell meaner, and show some teeth, and to this end, he presents her with gold tooth caps.

The competitors file into the Ukrainian Centre and take their seats on the stage. Tanis, up in the box with Tyson and the Coach, comments that the weather has chilled to about 10 deg-Reese Witherspoons outside. She bets $200 on Katy, the Coach $200 on Jonesy and Reilly, and Tyson $200 on Joint Boy, winner take all.

Jim Dickens thanks the crowd for coming out when it is down to 10 deg-Reese's Peanut Butter Cups outside, and describes the format and rules of the competition. He excuses Joint Boy to use the toilet (after Joint Boy corrects his request from "can" to "may") and announces the first word will g to Katy. At this, the crowd erupts in cheering for her, until Dan stands up, infuriated, and shouts them down.

Shut up! Shut your fucking mouth! You think this is the PGA? You can just hoop and holler whenever you want? Ba-ba fucking booey? We respect our athletes here. So sit down, shut up, and enjoy some fucking adult spelling! — Dan

She spells the first word, farceur, with aplomb, but the audience hesitates to clap. The Hicks deliberate on whether they should be allowed to cheer or not, and conclude that Katy would be expecting it.

Okay, I'm sorry for my outburst earlier. I came at you with a lot of anger, and that was unnecessary. You can cheer if someone gets a word right, but it starts and ends there. I don't wanna hear a fucking fart out of any of you if someone gets a word wrong. As sure as grandma's got gout, if I hear one fucking heckle, I will staple your tongue to your taint, so you can watch me kick your ass. — Dan

The Skids give Stewart, the next speller, a standing ovation, but they are the only ones cheering. Stewart dispatches the word disparate without difficulty. Reilly and Jonesy, called up as a single team, are heckled as "fucking idiots." But to Jim's surprise and theirs, the word they are given is hockey, which they barely manage to spell, but ultimately do. Joint Boy, stumbling in from the washroom, spells ensconce with ease, before returning to the washroom. McMurray is thought to make misspelled confrere, but he argues that the correct spelling was "exactly what I said," and Jim Dickens allows it.

A spelling montage follows. Katy puts away luxuriance and elucubrate, Stewart receives cheers from his entourage for sycophant, and Jonesy and Reilly eke out rink, puck, and stick. McMurray survives inaudible, unintelligible, and undecipherable after disputing. After this, the Hicks interrupt to demand an intermission. Jim Dickens refuses, for "In the words of arguably the greatest Canadian rock band of all time, The Tragically Hip, 'It's a good life if you don't weaken.'" Wayne replies that in the words of Gordon Downie, legendary lead singer of The Tragically Hip, "I can make you scared if you want me to," and a 15-minute intermission is called.

During the intermission, as Wayne goes to make sure Katy stays hydrated, Dan and Daryl approach Jim Dickens to note that Reilly and Jonesy's words are far easier than the others', and all hockey-related. The Coach objects to changing the procedure, reminding the Hicks that they are always saying not to fuck with tradition; the rules have been set ever since Uncle Eddie won the first Letterkenny Adult Spelling Bee in the 1960s. Similarly, Tanis complains that McMurray's mumbling makes it impossible to tell if he is spelling correctly. McMurray accuses Tanis of betting on the outcome, which infuriates Jim Dickens. Joint Boy asks Tyson for more joints, but he is out.

An upset Jim Dickens calls the Bee back to order, saying that due to accusations of irregularity, the order of spellers will now proceed randomly. Joint Boy is eliminated on dithyramb, and Reilly and Jonesy on bosky, despite its similarity to broski. McMurray is given penalty, which the Coach exclaims was supposed to have been Reilly and Jonesy's word; again he misspells it but claims he was misheard. At this Tanis replays a recording of his response at half speed, and McMurray is declared eliminated.

Only Katy and Stewart now remain. Katy is given triskaidekaphobia, spelling it "T-R-I-S-K-A-I-D-E-K-A-P-H-O-B-I-A," but Jim says this is wrong, and gives the word to Stewart, who spells it as "T-R-I-S-K-A-D-E-K-A-P-H-O-B-I-A," and is declared the winner. But Tanis points out that Katy's spelling was correct, and that it was the monitor that was incorrect. Stewart claims "that's exactly what I said," but Tanis plays back the recording, showing that he did not. The Hicks join Katy on the stage and raise her on their shoulders as she is awarded the trophy as champion of the Letterkenny Adult Spelling Bee once more.

A humbled Stewart asks if anyone wants to double him on the way home; the big city slams dismiss him as a "fucking idiot." This brings a smile to Reilly and Jonesy's faces, but they too are dismissed as "fucking idiots." Reilly receives a text message from the Coach, saying he has discovered the Shamrockettes are divided over a man; they wonder who it could be.

The scene cuts to Shoresy doing a handstand in the shower.

Give your balls a tug, you titfucker. — Shoresy

According to Tunefind, the following songs are featured on this episode: