Letterkenny Live! is a 90-minute live comedy performance which includes sketches featuring the characters from Letterkenny as well as standup routines and screenings of clips cut from the show. The 2018 tour featured Jared Keeso, Nathan Dales, K. Trevor Wilson, and Mark Forward. Michelle Mylett joined the group for the 2019 U.S. tour. 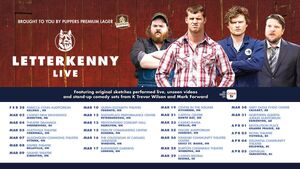 The original 2018 tour of 26 Canadian cities, presented by Puppers Premium Lager and CraveTV, was announced on October 23, 2017. Due to overwhelming demand, the schedule was expanded to 42 performances as announced on November 6; the additional shows are indicated with an asterisk (Exclaim.ca). 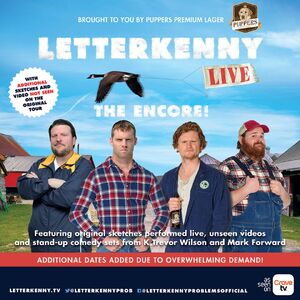 Letterkenny Live, the Encore! was announced on July 9, 2018. Presented by Puppers Premium Lager and CraveTV, and produced by New Metric Media, it extended the tour to another ten stops, and included some new material and video not seen in the original tour (Feldman Agency).

On April 12, 2019, a U.S. tour was announced featuring Keeso, Dales, Forward, and Wilson, with the addition of Michelle Mylett, who plays Katy.

Tickets were made available for presale through Letterkenny.TV and Hulu on Monday, April 15, with a second show announced for each city. General admission sales began on Friday, April 19 at 10:00 AM Eastern.

Numerous tweets and Instagram posts from cast members about a "big announcement" presaged notice of a 2020 tour with "new sketches" the following day, October 18, 2019. Presale tickets would be made available the following Monday, October 21, at 10:00 AM Eastern, with general sales beginning on Friday, October 25, 2019 again at 10:00 AM.

In addition to Keeso, Dales, Mylett, Wilson, and Forward, the promotional poster included images of Tyler Johnston, Dylan Playfair, Andrew Herr, and Evan Stern as their respective characters, Stewart, Reilly, Jonesy, and Roald, hinting at their appearance in the new production.

A total of 37 performances were scheduled between February 27 and April 21, 2020 all across Canada and the U.S.

On March 12, 2020, a statement was released announcing the postponement of all remaining performance dates, starting with the March 12 Buffalo show, as a precaution amidst the rapid spread of the COVID-19 "novel coronavirus" and the rapidly evolving restrictions on travel and public assemblies. Rescheduled dates were to be announced, with tickets for the postponed shows honored.

No word on rescheduled performances came until July 19, 2021, when a revised schedule was released including new locations (indicated here with an asterisk) and new shows (two asterisks). Presale tickets were made available the following day, followed by a venue-specific pre-sale on Thursday, July 22, and general ticket sales on Friday, July 23 at 10am. Ticketholders from the postponed 2020 shows were given a window of 30 days to claim a ticket for the rescheduled date or a refund.

On January 20, 2022, however, major changes were announced, with U.S. shows postponed and Canadian shows cancelled:

Due to COVID, we’re rescheduling our American February Letterkenny Live shows to April and early May. See below for the new schedule. All tickets will be honoured for new dates, and refunds will be available at the point of purchase. Despite all efforts, the Canadian tour dates have been cancelled due to local government restrictions concerning COVID-19 and scheduling issues. We will reschedule as soon as we can. All tickets for the previously announced Canadian dates are valid for refunds where originally purchased.

Reviews of the live show have been somewhat mixed. Naturally, critics who enjoy Letterkenny the television show have written positively about the show, while those who find it vulgar have written negatively. Taylor Young Millage of The Algonquin Times, the student newspaper of Algonquin College, reported of the Ottawa show that the routines were "received by thunderous applause and cheers from an eager crowd" (Algonquin Times). In contrast, J.P. Squire of the Kelowna Daily Courier dismissied as "R-rated, offensive, revolting, distasteful, foul-mouthed, meant to offend anyone and everyone" and something that appealed only to Millenials (Penticton Herald).

Rebecca Cohn, writing for HalifaxBloggers.ca, thoroughly enjoyed the show, but commented on somewhat thin material. Much of the content was recycled from earlier seasons, and with the lack of supporting cast members, the 90-minute performance was propped up by the standup routines by Wilson and Forward (HalifaxBloggers.ca). A Reddit thread on the Moncton show praised the standup acts and the adaptation of the material to the locale, but was similarly disappointed in the rehashed material.