Katy is a main character on Letterkenny. She is played by Michelle Mylett.

Katy is Wayne's younger sister and one of the Hicks, and is often seen hanging out with them (Wayne, Daryl, and Dan); though she is often exasperated by their farting, their naming their burps (Les Hiques), their drunken alternate personalities (Bradley Is a Killer), and other such crudeness. Independent, assertive, and free-spirited, Katy prefers to wear revealing clothing, which Wayne is unhappy with; he often requests that she "put some fucking clothes on," to which she tends to reply, "not my forte."

Katy could be described as a misandrist, often ending up in relationships with men that she dominates and demeans. Upon learning that Stormy, Wayne's female dog, keeps trying to kill her potential male mating partners, Katy approvingly remarks, "That's my girl!"

Not much is known of Katy and Wayne's childhood, except that they were not allowed to have birthday celebrations growing up (Super Soft Birthday), and have fond memories of their Uncle Eddie (Uncle Eddie's Trust)​. From a young age, she was an accomplished speller, winning the Letterkenny Adult Spelling Bee nine years in a row. She was defeated by Stewart one year, but returned to reclaim the ribbon the following year (Letterkenny Spelling Bee).

It is unclear if she is in school or employed outside the farm. Feeling restless, she answers an ad for a Talent & Model Search at the hockey arena, meeting an agent there who wants to sign her as a model. He picks her up at the farm — where Reilly, Jonesy, and Stewart have gathered to fight for her affections — and takes her to the big city (Finding Stormy a Stud). She returns to the farm before long, finding modeling boring — she complains that "a monkey could do it," there is no money in it, and it caused her to miss "sledding" (snowmobile) season.

She arrives with the male model pair Shep and Kingsley in tow (Sled Shack), who she is sleeping with. Soon tiring of their body image problems, she borrows Wayne's truck to drive them back to the big city for good (Puck Bunny).

Katy is bisexual and has a high libido. At the start of the series she is dating both Reilly and Jonesy in a polyamorous relationship (Ain't No Reason to Get Excited)​. They break up with her for two-timing them (A Fuss at the Ag Hall), even though she gets them to admit to being unfaithful as well (The Election). She is briefly involved with Stewart, although they do not have sex, and break up before Katy can discover that he has a rather large penis, to her later dismay (The Native Flu). She also indicates she has seen Rat-Ass naked (Super Soft Birthday), and that she is strongly attracted to Bonnie McMurray (The Battle for Bonnie McMurray) and to Bradley (Bradley Is a Killer). She hooks up with Mrs. McMurray in the bathroom at the St. Patrick's Day party. She also has a sexually charged exchange with Angie trying to remove her influence from the Letterkenny Irish (Puck Bunny).

Katy is a slender, light-skinned woman with hazel eyes and brown hair, which she colors blonde during her modeling stint in the city. In warm weather she usually wears revealing clothing, usually short shorts or cutoff jeans with sleeveless tops; covering up is "not her forte" (Ain't No Reason to Get Excited). Her sledding outfit consists of black pants, a black parka, and black ear warmer headband (Les Hiques).

Katy is Wayne's younger sister and Wayne is very protective of her. Nevertheless, he allows her to make her own choices even when he disagrees strongly with them, such as her choices of male companions; namely Reilly and Jonesy, Stewart (A Fuss at the Ag Hall), Shep and Kingsley, Dierks, and others. Wayne is also often perturbed by her many remarks that imply her promiscuity, as well as her choice of clothes, or lack thereof. Wayne still says he would trust her with just about any job before a man (Relationships), and often demonstrates a respect for her intellect and a willingess to consider her thoughts over those of the other Hicks.

Not much is known about their childhood, except that they were denied birthday parties, and partook enthusiastically of Daryl's birthday parties to compensate (Super Soft Birthday). They were both close to their Uncle Eddie.

Katy considers Dan a friend, and they often spend time on the farm at the produce stand, breakfast table, or porch. Dan compliments Katy from time to time for various things, saying "that's what I appreciates about you." Katy is skeptical. "Is that what you appreciate about me?" (Ain't No Reason to Get Excited)​ Wayne usually advises Dan to mind his words at that point, and the subject is changed. Once, however, Dan admitted "Your sister's hot Wayne. There, I said it. I regret nothing. I regret nothing!" and fled the produce stand—stopping a minute later to catch his breath, being "Too fat to run."

Katy and Stewart attended high school together. She would sometimes sneak into his parties when she was 15, stealing his mix tapes of original music. They grew apart as Stewart became a heavy meth user, but encountering him outside the Letterkenny Walk-in Clinic, she admits that he did used to charm her. This inspires Stewart to quit meth and rededicate himself to DJing in the hopes of winning her heart (Rave). After Tanis makes cruel comments about Stewart after being banned from Letterkenny, Katy kicks her in the crotch in his defense, and later at MoDean's, offers him a swig of Gus N' Bru to make him feel included at the table.

Katy dated him briefly as a rebound from Reilly and Jonesy, leading to his expulsion from the Skids' basement and to the consternation of the Hicks. Katy splits up with Stewart after he was giving her "the silent treatment" instead of expressing his feelings (Relationships). She never saw him naked, to her later regret (The Native Flu).

Katy and Stewart were also rivals in the Letterkenny Adult Spelling Bee. Katy won for nine years in a row until defeated by Stewart, but returned the following year to reclaim the crown (Back to Back to Back).

Katy dates Reilly and Jonesy simultaneously in a polyamorous relationship (Ain't No Reason to Get Excited). She stops coming to their games, as they do not play much, but returns after watching them work out, only to have them ask her not to come as "too distracting for the boys" (Wingman Wayne). They break up with her for two-timing them (A Fuss at the Ag Hall)—even though she gets them to admit to being unfaithful as well (The Election). They are hostile to one another for a time (The Election), but she agrees to help rid Angie from the Letterkenny Irish.

She is pleased when they invite her to a game later, and start a fight to defend her honor (Bradley Is a Killer). She wants to get back together, but only with Reilly, placing a wedge between the two buddies (Never Work a Day in Your Life). Eventually, Reilly tires of Katy sending him on errands like picking up sour candies—and misses Jonesy—and they break up again.

Katy has an intense dislike of Angie ever since she cheated on Wayne, whom she had been with for five years. She vowed revenge, but did not get a chance as Angie left town shortly thereafter. Katy finally confronted Angie in the dressing room at the arena, disarming her with the suggestion of sexual interest before kicking her in the crotch.

Katy first met Dierks after arriving at the strip club to meet the boys; their mutual attraction was instant. Although Wayne had a strong visceral dislike for Dierks, he respected Katy's interest in him, as did Gail and the other townsfolk, even when she began to adopt some of his unusual speech mannerisms. Katy observed his wandering eye, and acknowledging her past dalliances, made it firm that she took this relationship seriously, and intended and expected monogamy, to which he agreed. Nevertheless, she caught him being unfaithful after his nephew's 18th birthday party, bringing her scorn and unleashing the rage of the entire town, who delivered a savage beatdown of him.

A conversation with Mrs. McMurray (Different Strokes for Different Folks)

Sunning in a parking lot (The City)

Ever seen the back of a BMW? (We Don't Fight at Weddings)

Bonnie and Katy (We Don't Fight at Weddings)

An entrance (We Don't Fight at Weddings)

Katy at the Rez (Great Day for Thunder Bay)

Katy at MoDean's II (Bradley Is a Killer)

Katy in the McMurrays' hot tub (The Battle for Bonnie McMurray)

With Shep and Kingsley (MoDeans 2)

With her new agent (Finding Stormy a Stud)

Getting the silent treatment (Relationships)

In Wayne's ad (The Election)

Katy takes a selfie (The Election)

Katy comes to the barn (Rave)

Teaching Wayne about Tinder (Ain't No Reason to Get Excited)

With Pete and Repeat 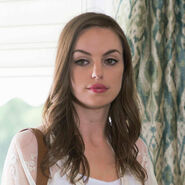