Ain't No Reason to Get Excited
Jonesy is a main character on Letterkenny. A hockey player and coach, he is best friends and the inseparable companion of Reilly. He is portrayed by Andrew Herr.

When first introduced, Jonesy is a stereotypical junior hockey player, cocky and self-centered. As the series progresses however, he shows greater maturity, depth, and sensitivity.

For instance, when the Coach calls him out for caring more about hockey player lifestyle than winning—"you're poseurs!"—he and Reilly put in the effort to get in shape and study the tape, winning both Katy and Coach's approval (Wingman Wayne). On the other hand, he continues to womanize and remains a poor speller (Letterkenny Spelling Bee).

He and Reilly had difficulty adjusting to playing senior hockey with the Letterkenny Irish, ostracized from the older teammates. When their old coach returns and dismisses their efforts as a "cakewalk," and berates them for skipping leg day, they both near a breaking point. Jonesy tries to encourage Reilly to stay with the program—that his feelings are injured, not hurt, and after some soul-searching with Glen they emerge reinvigorated (Finding Stormy a Stud). He and Reilly come to lead the league in goals (and PIMs), and they take a leadership role on the team, rebuilding team unity by ridding them of a divisive puck bunny, tillying together, and coaching them at chirping from the bench.

Jonesy, like Reilly, speaks almost exclusively in hockey lingo; they often riff off one another for extended periods. Also like Reilly, he demonstrates deep affection for his mother, and is enraged when Shoresy speaks crudely of having sex with her (MoDeans 2).

Jonesy wears his hair longer than Wayne's, but shorter than Reilly's, and with sideburns. When not in uniform, he usually wears a tank top, board shorts, and flip-flops or trainers, usually accessorized with sunglasses and/or a baseball cap. He dips tobacco, and is often seen holding a spitter. When working out in The Basement, he may be seen in an orange sleeveless T-shirt or a sleeveless hoodie.

Some time after their breakup with Katy, she got back together— but only with Reilly (Bradley Is a Killer). Jonesy felt intense loneliness exacerbated by taunting from the gym rats Dax and Ron (Never Work a Day in Your Life). Like Reilly, however, he felt the need to pretend his life was great to cheer up the other, making the situation even more awkward when they would meet up (A Fuss at the Golf Course). Knowing he was seeking a companion, both Glen and the Skids recruited him aggressively to join them, leading to further uncertainly. Ultimately, Reilly returned to rescue him, and Katy broke up with Reilly so that the two of them could wheel, snipe, celly together again (Way to a Man's Heart).

They became "accidental tunnel buddies" when they hooked up with each other's "swipy snipies" on Halloween night and early the next morning (The Haunting of MoDean's II).

Jonesy allows himself to be taken in by Reilly's bad ideas from time to time. For example, Jonesy tried to discourage Reilly from using steroids, when they were disturbed by their lack of gains over the summer. Reilly talks him into it later, however, promising they would only do a quick half-cycle, and go all-natural by the start of the season (in actuality, the plan proves unsuccessful (The Letterkenny Leave)). They also participate in a "takedown tourney" against Ron and Dax with an extremely unfortunate outcome (Different Strokes for Different Folks).

The Coach has little regard for Jonesy initially, seeing him as more interested in the hockey player lifestyle than in winning games. Things improve after he and Reilly put in the effort to improve their play for the Shamrocks (Wingman Wayne).

They struggled in their first year of senior hockey, and suffered an identity crisis when the Coach was hired to lead the Irish. Returning reinvigorated, however, they came to lead the league in goals (and PIMs), making them the Coach's pride (Sled Shack).

When the team folds, Coach invited Jonesy and Reilly to be his assistants in coaching the Letterkenny Shamrockettes, giving them the task of fixing team unity (The Ol' College Try). He bet on them in the Letterkenny Adult Spelling Bee, but his attempt to fix the bee fails (Letterkenny Spelling Bee). Nevertheless, he was overjoyed with them when the Shamrockettes win back-to-back-to-back championships (Back to Back to Back).

When Jonesy and Reilly suffer a personal crisis over their play on the Letterkenny Irish, Glen appears unexpectedly at the hockey arena "for a normal reason", he says. He takes them out for ice cream and suggests that they seek guidance from God, but they are slow on the uptake. Glen ultimately cannot understand their motivations and gives up on trying to convert them (Finding Stormy a Stud).

Jonesy and Reilly are dating Katy simultaneously at the start, affectionately nicknaming her Katy-Kat. Outside her presence, they both speak coarsely about being unfaithful to her when on the road (Super Soft Birthday). Still, it matters to him for her to come to games, and when she voices her disappointment with their lack of play time, he and Reilly work to improve their performance and hustle. Rewarded with more time on the ice and rare approval from the Coach, however, they dislike the attention she draws from Shoresy and the other players, and they ask her not to come to games any more (Wingman Wayne).

When the Letterkenny Irish finally get a W at the end of the season, Katy indicates that she wants to get back together—but with just one of them: Reilly. This leads to mixed emotions for both, and drives a wedge between the two buddies. While they try to speak encouragingly to each other, the situation remains awkward until Katy breaks up with Reilly, allowing the two of them to resume adventures together.

Jonesy and Reilly struggle to fit in when they first join senior A hockey, receiving contempt and abuse from Barts, Yorkie, Schultzy, Fisky, and Boomtown. After they help rid the team of a puck bunny (Angie), and then become leading scorers on the team, the dynamic changes dramatically, with Reilly and Jonesy becoming de facto captains, admonishing them on everything from shredding the red to trimming their bush. The sole exception is Shoresy, who continues to hurdle abuse and sometimes urine at them throughout.

Jonesy is somewhat discomfited at the chirping he receives from Ron and Dax while lifting weights alone at The Basement. Once he is reunited with Reilly, however, he takes their attention in stride, complimenting their chirping even though "people aren't supposed to enjoy being catcalled." Once Ron and Dax establish that they are interested in otters—and not men built like Reilly and Jonesy— they agree to be buddies, "Daxy" and "Ronzy" become gym buddies (Way to a Man's Heart).

Jonesy is a frequent target of Shoresy's chirps, many of them sexually explicit references about his mother, often in the showers or when on the toilet. The antagonism between them grows over the years, culminating when Jonesy's mother texts him on the night of the Letterkenny Shamrockettes' championship— not to say congratulations, but "trying to track down your friend Shorsey."

Jonesy is wary of Tanis, fearing her crew of Natives when the Letterkenny Shamrocks have a game at the Rez (Rave). Fearing repercussions from their ban from Letterkenny, he and Jonesy enlist the assistance of the Hicks when they return to the Rez with the Letterkenny Irish (The Native Flu). In return, they accompany the Hicks to the Rez, this time in support of Tanis, as she tries to win back the loyalty of Axe and Slash, and they brawl against the degens with the Hicks and the Natives (Way to a Man's Heart).

The battle for Jonesy 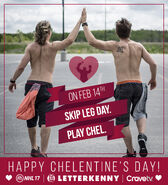 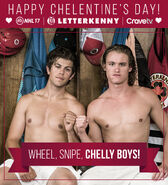 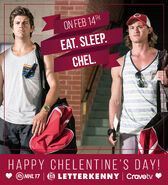 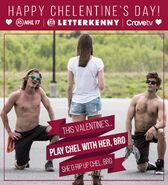 Play Chel with Her Bro Will You Be My Chelentine

Do you think I check the scheddy?

Not having the Native flu

Ready for a donnybrook