Dark with a single blue highlight

St. Perfect's Day
Devon is a supporting character on Letterkenny in Seasons 1 and 2. He is played by Alexander De Jordy.

Devon is one of the Skids, the group of goth/emo outcasts led by Stewart whose lives center on drugs, video games, and music, and who spend their time in Stewart's basement or in the parking lot of the dollar store. Devon is a childhood friend of Stewart; they went halfsies on a receiver in grade six, and in grade three, Stewart had stolen a television from Devon's grandma to play Ecco the Dolphin on Sega CD (Sled Shack).

Devon emerges as the group's de facto second-in-command. He is the media wizard of the group, being the force behind the creation and marketing of Fartbook (Fartbook), and later McMurray's campaign video (The Election). He games, dances, and makes and does drugs with the Skids enthusiastically, but hates their petty vandalism, calling it "two-bit" (Sled Shack).

Devon is outraged when Stewart announces he has spent the group's funds to host a rave, and that they would be giving up the meth business altogether; Stewart's motivation is the romantic pursuit of Katy. Devon successfully sabotages the rave by telling the other Skids to remove it from their Facebooks, and by spreading the rumour that the Ag Hall had an asbestos problem. Stewart returns embittered by the experience, and announces he will make Letterkenny the biggest meth town in the country, to Devon's rejoicing (Rave).

They make a deal with Tanis and the Natives to buy cigarettes from them for cheap, but betray them by selling them for profit on the side, in violation of the agreement. When Tanis and her crew arrive in town for retribution, Devon is prepared to fight alongside Stewart, and eventually does (A Fuss in the Back Bush).

This alliance proved brief, however, as Stewart and Katy began dating, and Devon became jealous. They are cold to Katy when Stewart brings her to the basement, leading to a confrontation where he and Stewart stab each other with Epi-Pens. When Stewart returns alone later, Devon tells him he has been expelled from the group and from the basement, forcing Stewart to beg Wayne to stay at the farmhouse (A Fuss at the Ag Hall).

Devon subsequently turned his ire towards Katy, chirping with her when they would encounter each other in the dollar store parking lot. While there, one day, McMurray and Mrs. McMurray approached him to enlist his help in making a video to support McMurray's campaign for Ag Hall president. Devon agrees to it, knowing McMurray is running against Wayne.

Hurting Wayne hurts Katy. Hurting Katy hurts Stewart. It can be done and it will be done! — Devon

He dives headlong into the project, assisted by Roald. He assembles a cast of mixed ethnicities and directs them to act in stereotypical ways. Despite their skepticism, the video is successful and achieves over 1,000 views by the time Wayne sees it. Wayne allows Stewart to produce a competing video, which loses him the election but which beats Devon's view count, as was Stewart's goal (The Election).

After Katy broke up with Stewart, Stewart returned to the Skids, who were dancing in the dollar store parking lot. He and Devon silently agree to a dance-off, after which Devon ceremonially crowned Stewart with his black bowler hat, signifying his handing over of the leadership of the Skids back to Stewart (Relationships).

Devon was sympathetic to Stewart after his return, and renewed his hostility towards Katy on account of Stewart's hurt feelings. He orchestrated an intervention for Stewart when they went to make a pitch for Uncle Eddie's inheritance to Wayne and Katy (Uncle Eddie's Trust).

Stewart, you are such a disastery that sometimes you don't even know if it's a weekday or the weekend. It hurts me to see you being such a disaster. I wish you could go back to being only a mild disaster. Love, Devon — Devon

He is unable to console Stewart with video games, and accompanies him to the farm where he plans to "reclaim the Lady Katy," arousing the ire of Reilly and Jonesy who have arrived to attempt the same. Katy had already left for the city, however, leaving them out of sorts.

Devon disappeared some time after St. Patrick's Day, without notice or explanation, leaving Stewart and Roald distraught; Stewart destroyed the handful of possessions he left behind in the basement. They assume at first that the masked figure in a clown costume throwing stink bombs into the basement is Devon, but are startled to discover that it is a girl: Gae.

Before the pitch (Uncle Eddie's Trust)

Approached by McMurray (The Election)

Brainstorming a video (The Election)

An uprising (A Fuss at the Ag Hall) 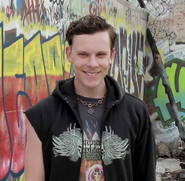