Ain't No Reason to Get Excited
Dan, nicknamed Squirrely Dan by his close friends, is a main character on Letterkenny. He is played by K. Trevor Wilson.

One of the core Hicks, Dan spends much of his time with Wayne and Katy at their farm along with Daryl. He was apparently not childhood friends with them, however, and must have the history of Daryl's super soft birthdays explained to him (Super Soft Birthday).

Dan is known for his long-winded stories, his large extended family, his oversharing of sexual details, and his flatulence. He also has an unusual speech pattern, pluralizing singular words by inserting an "S" at the end of seemingly random words.

Yous makes the most delicious trail mix, Katy, and I got to say that's what I appreciates about you. — Dan

He takes women's studies courses, and is deeply influenced by the teachings of Professor Tricia.

Dan is large and heavyset, usually wearing overalls and a flannel shirt. He almost always wears a baseball cap, a simple black cap early in the seriesa, then a plain red and white snapback, and a brown "Alberta Beef" cap since Season 9. His face is thickly bearded. In the winter, he wears a yellow and black sledding jacket, whereas on formal occasions, he follows the tradition of his father and grandfather in rocking a kilt.

Dan is attracted to Katy, which she tolerates better than Wayne. Dan did tell Wayne that he found her hot on one occasion, thereafter fleeing in terror, although he did not make it far, being in his own words, "too fat to run" (A Fuss in the Back Bush). Katy is disgusted by Dan's uncouth habits, such as farting, but this is true of Daryl as well.

His habit of repeating what he has learned in Professor Tricia's class begins to grate on Katy's nerves, leading her to tell him multiple times to "get off my dick." He later apologizes to her, and they resume their friendship.

Ellen is a kinesiology student who is a romantic interest of Dan's; she is unnamed in Season 2, and then returns at the end of Season 7.

While playing catch with Wayne and Daryl on one occasion, Dan wanted to discuss a recent date, hesitant because all acknowledge that it was impolite to kiss and tell, though he admits that they did French, and that the Frenching did take a "hard left turn" from which he had yet to recover (Relationships). Specifically, she suggested that Dan might benefit from having some attention paid to his "buttshole." Although he says that he "really liked" it, Daryl and Wayne do not say a word in reply. The gal is not mentioned again for some time.

She returns to Letterkenny, having a brief encounter with Tyson and Joint Boy (In It To Win It), and reconnects with Dan. He introduces her to Daryl, who cannot control his giggling knowing she is the one who put a finger up Dan's bum, but she is unfazed by this, suggesting he is missing out by never having a tongue up his. Dan admits that while he finds sex with Ellen adventuresome, it is also exhausting, and learns to appreciate his walks with Lovina Dyck (Holy Sheet).

He continues to see her, but in the interest of having a "normal" conversation, has a double date with Wayne and Rosie. This conversation devolves almost as quickly as the one with Daryl, but Ellen joins in with no less enthusiasm (Sleepover).

Down the hatch (Different Strokes for Different Folks)

Making a deal (Dyck's Slip Out)

Extending a hand (Dyck's Slip Out)

An opinion (Dyck's Slip Out)

At the produce stand (What Could Be So Urgent?)

Rockin' the kilt (We Don't Fight at Weddings)

Reviewing a map of the farm (Super Hard Easter)

Making a "joke" (The Battle for Bonnie McMurray)

Ohhh (The Battle for Bonnie McMurray)

Squaring off with Darry (The Battle for Bonnie McMurray)

What could be an inappropriate fart? (Puck Bunny)

Fighting with the little knuckle (Finding Stormy a Stud)

The purpose of charitables (The Election) 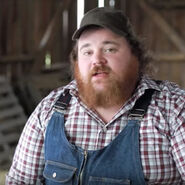