Wingman Wayne
The Coach is a recurring character on Letterkenny, portrayed by Mark Forward. He is principally an antagonist of Reilly and Jonesy, but also interacts with the other townsfolk in more recent seasons.

The coach is known for his short and explosive temper, manifested not only in addressing his players, but when he is distracted on the golf course (A Fuss at the Golf Course) or on stage (Letterkenny Talent Show). This may be related to the passing of his beloved wife, Barbara, shortly before the series commences.

He was mostly unsuccessful with the Letterkenny Shamrocks, at one point racking up ten losses in a row (Wingman Wayne). He was frustrated at players like Reilly and Jonesy, who he saw as poseurs more interested in the hockey player lifestyle than in winning games, though he praised them when they demonstrated more hustle (Wingman Wayne). He was infuriated when, after a lacklustre game, he saw the team standing in line to get into Stewart's rave at the Ag Hall only minutes before curfew (Rave).

He stepped down from the junior team when he heard the Letterkenny Irish needed a new bench boss. Reilly and Jonesy, who had been struggling to fit in with the senior players, were dismayed when he lambasted the "cakewalk" they have been having, sending them into personal crises as they questioned whether they wanted to continue playing (Finding Stormy a Stud). 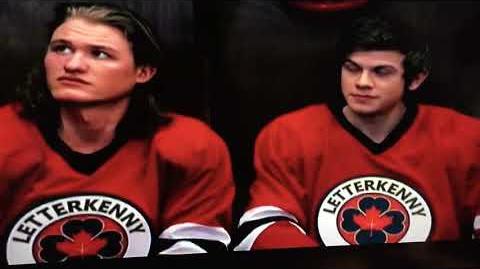 After they put more effort into training, becoming the top scorers in the league, the Coach's attitude to them softens somewhat. In pursuit of a single victory, he encourages a strategy of selfish hockey on the part of Jonesy and Riley, with the mantra "they don't ask how, they ask how many" (Sled Shack). He further gives them the responsibility of rebuilding team unity after they are split in competition over Angie (Puck Bunny).

Just as they begin to take leadership of the team, Coach adds Shoresy to the lineup. He is deeply impressed with Shoresy, calling him a "tour de force, piece de resistance, masterpiece," but Reilly and Jonesy are disheartened to see him (MoDeans 2).

The team fails to win, but the brawl brings the team together, and as they celebrate, the Coach declares "I have never been less embarrassed in all my life" (Bradley Is a Killer).

After the Letterkenny Irish fold, in his words, "'cause it's Senior A whale shit hockey," he takes a job as head coach for the Letterkenny Shamrockettes, bringing Reilly and Jonesy along as assistant coaches. This team, too, faces unity problems which Reilly and Jonesy resolve. Finally winning a championship, he takea the trophy and collapses on the ice, sobbing with joy (Back to Back to Back).

Outside of hockey, the Coach serves as president of the board of the Letterkenny Grey Granite Copper Creek Whistle Ridge Golf and Country Club. He comes into conflict with McMurray and the Hicks when the board votes to oil Canada goose eggs to prevent them from hatching, to cull their numbers at the golf course. After a lengthy campaign of protest, he agrees to stop the oiling (A Fuss at the Golf Course).

The coach is a bearded, somewhat heavyset man who is slightly older than the main characters. He dresses in a suit for games, and in a polo and plaid shorts on the golf course, but otherwise is most commonly seen in a warmup suit for his team, with a white undershirt.