Jacob Tierney
Bock et Biche is the sixth and final episode of Season 5 of Letterkenny.

The Hicks and Hockey Players travel to Quebec for Anik’s pre-wedding party.

You were sippin' suds with your buds the other day…” — Wayne

The Hicks are drinking at the bar at the Ukrainian Centre. Daryl asks to be honest for a second—a sentence opener they dislike, one among several, because it suggests dishonesty heretofore—and admits that he originally thought craft beer was craft beard, since the brewers sported beards. Dan states that the preferred term is lumbersexuals.

Dan dislikes their punny beer names. Katy suggests they should use animal names, Daryl that they should include "berry," but Wayne disagrees with all of them, saying it should include a cozy word like toque or mittens, or if you want to double down on it, something about the outdoors. Katy says they should use suggestive names, like "Slip-it-in Cider," startling Wayne.

Let's get this gal a fuckin' Puppers. — Wayne

The Hicks, joined by McMurray, Tyson, and Joint Boy, have a shot at the Ukrainian Centre when Wayne gets a call from Jean-Guy. Les Hiques ask him to defend a "bock et biche" against degens from Laval. The Rookie, joining them at the bar, asks what they are talking about; JB explains that a stag-and-doe / Jack-and-Jill / drink-and-dance / turn-and-stomp / buck-and-doe is a pre-wedding party thrown by the best man and maid of honor to raise money for the wedding itself. Wayne informs everyone that the party is for Anik, making Daryl groan with regret.

Katy asks who's driving, as everyone present is hammered. Reilly and Jonesy show up just then; she invites them to the "swing-and-sway," and they enthusiastically accept, and drafted into driving. McMurray is reluctant, however, knowing that some at the party will dislike them for being English, and noting that separatism was alive and well in Quebec. Wayne replies that when a friend asks for help, you help him, and that's all there is to it.

They drive over the border and meet their French counterparts at the Salon d'Agriculture, and exchange jokes about the musicians on the playlist for the evening. Anik comes out of the building and tells Darry they have All-anus Morisette in the queue. McMurray interrupts to introduce himself as Jean McMurray; they have a discussion about names.

Jean-Claude, Anik's fiancé, joins along with Jean-Lance; he declares no one in Quebec wants a bock et biche. Jean-Guy explains that since he and Anik were raised in Hawkesbury, they enjoy the tradition. Anik reports that she was not allowed to invite English family to the wedding, and so she demanded this party so that they could be included. Jean-Guy adds that his English friends would help when the degens from Laval showed; Jean-Claude hates degens, and McMurray is happy to hear it.

The group heads into the party and Wayne gets their tickets, speaking in French with the old man selling them. The old man asks him whether he has brought a woman with him. Wayne hesitates, and the old man volunteers that despite his age he has a great deal of sex with girls. The reason he wants to know is that his niece is beautiful but has had poor luck with love, and he wants to introduce them. Jean-Claude overhears the conversation.

Anik invites Jean-Claude to the table where the Letterkenny folks are sitting, but he declines; they do a shot of sortilège (maple syrup whisky) without him. Dan turns the conversation to work; Jean-Pierre works at Jean Coutu, and Jean-Carl works at a Titty Bank, as far as the English can tell. Both the French and the English repeat "Titty Bank" repeatedly, without understanding. While they discuss, Anik and Daryl talk privately, and Anik says that she is unhappy, but washappy to see him. The others, meanwhile, realize that Jean-Carl works at TD Bank.

The table rumbles, signifying the arrival of the degens from Laval. Katy bursts into the men's washroom to fetch McMurray, who is at the urinal. He stops to apologize for not washing his hands, and she pushes him out the door. Outside, the fight is already raging as Anik and Katy watch. Anik is impressed with Daryl.

Back inside, the group does shots and dances to celebrate their victory, while Anik argues with Jean-Claude. Jean-Claude and Jean-Lance storm out, and Daryl sees Anik remove her engagement ring. He walks over to talk to her, and she says she has called off the wedding and that she is in love with him. They dance rapturously as the others in the group pair off with other partygoers.

Wayne, McMurray, Joint Boy, and Tyson return to the table and do many shots together. In the doorway, Wayne sights the old man's niece (Marie-Fred); she smiles as he points him out to her. Jean-Lance returns with his logger friends, this time to scrap with the Letterkenny men and with Jean-Guy's group. As the fight rages all around, Wayne walks through the crowd towards Marie-Fred, captivated by her. Jean-Claude enters and wraps a jacket around her shoulders.

According to Tunefind, the following songs are featured in this episode: 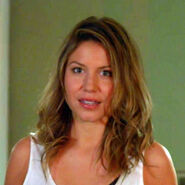