A Fuss at the Golf Course

A Fuss at the Golf Course

Jacob Tierney
A Fuss at the Golf Course is the second episode of Season 4 of Letterkenny.

The Hicks and the McMurrays defend the majestic Canada Goose down at the local golf course. The turf war for the Dollar Store continues.

The Hicks are drinking beers on the porch of the farmhouse. Wayne shoos Gus away from licking Daryl's boots, saying that all dudes' shoes are covered in piss. Dan agrees, saying ants could ride Sea-Doos on the floor in front of a urinal. Wayne thinks ants riding Sea-Doos is not so crazy, seeing how smart ants are. They discuss what it would take for a team of scientists to build a Sea-Doo that could be operated by an ant, and what the life of an ant given the chance to ride a Sea-Doo might lead. Dan apologizes for questioning the ant's decisions. Daryl says they've all learned something— not to be an expert, because "everybody's a fuckin' expert."

Must be nice. — Wayne

Reilly drives up to the produce stand, but before he can even say hello, Katy asks him to get her some sour candies. He drives off, leading Dan to observe

You gots him well-trained, don'ts ya? — Dan

Just then, an extremely agitated McMurray and Mrs. McMurray drive up to talk to Wayne about what the Coach is doing about goose shit down at the golf course. Mrs. McMurray specifies, they track down the Canada Gooses nests, then put oil on Canada Gooses eggs so they won't hatch. The entire group is outraged, smashing beer bottles and exclaiming their horror.

They sing the praises of Canada Gooses, and set off for the golf course to have a word with the coach.

Reilly runs into Jonesy at the gym. Their awkward hello is interrupted by Ron and Dax having an encounter with Alistair the degen, after which they turn their attention to the hockey players, tossing hockey-theme double entendres at them.

The Hicks drive out onto the golf course and confront the Coach, who is playing a round with the other members of the board watching.

At the dollar store parking lot, Glen and the Skids prepare to square off in their turf war. Jonesy is caught in the middle. Glen asks him to become his altar boy—or altar man. Stewart invites him to join them instead. Jonesy is not religious, but has nothing against it either, and asks if they can all just get along. The answer is a resounding no.

Back at the golf course, the Hicks have come up with a solution for controlling Canada Gooses without resorting to oiling eggs. They place decoy coyotes— the "most obnoxious predators of rural Canadas" as Dan observes— to keep the Canada Gooses away; no eggs on the course means no eggs to be oiled, and animal cruelty avoided. 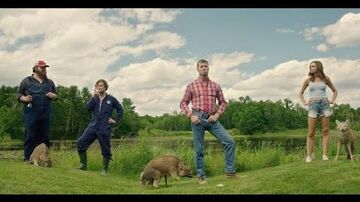 You better fix that divot 'cause Canada Gooses would fix it for you. — McMurray

The Skids make another bid to recruit Jonesy. He is excited about Chel, but less so about dancing, but then they suggest hard drugs, which he considers a fight on sight. Glen offers bread and wine, which Jonesy likes okay, but not as much as he likes Chel. Desperately, Glen asks if he likes cheese

Everyone knows cheese is the milk of Christ. You've hit the motherlode of cheesie yumminess when you pick Christ. It's a classic. Bread, wine, cheese. And also cured in salted dried meats. That's the flesh of Christ.… See Corinthians! Bread, wine, cheese, meat! Christianity is a charcuterie board. Come have some charcuterie with Christ, Jonesy. You'll like it. It's yummy. — Glen

They are interrupted by Reilly, who has driven up again to get Katy's sour candies. Jonesy suggests Reilly should just buy a bunch of sour candies at once to have them handy, rather than coming back into town to get sour candies all the time. Reilly is touched.

Did you know that you're the smartest person that I've ever met? — Reilly

Jonesy explains the situation: he needs a crew. Glen and the Skids resume their efforts to court Jonesy, calling to him like a puppy.

The decoys in place, the Hicks join McMurray and Mrs. McMurray in chirping the coach, proclaiming ever more extravagant praise for the Canada Goose. The Canada goose is what you hear when you play various records backwards, and a Canada goose feather was buried at centre ice for Sidney Crosby's golden goal at the 2010 Olympics, and the Canada goose helped Columbus discover North America, and Canada gooses tried to JFK before his assassination, and so on.

Reilly returns to the produce stand with a bag of sour candies, but Katy is not interested in them; she wanted the sour jellybeans. This upsets Reilly, who has just driven all the way into town; Katy then suggests that Jonesy could pick them up, unless he is gone. Suddenly struck with the fear that Jonesy could be gone, Reilly rushes back to the dollar store, where Jonesy is still caught between Glen and the Skids. Jonesy dashes to the Jeep, and the two drive off, reunited.

After another round of chirping from the Hicks, an upset Coach agrees to call off the oiling of the Canada goose eggs. Wayne shakes the Coach's hand, and is relieved to head home.

Thank fuckin' Christ, am I happy to leave this fuckin' goose factory. — Wayne

According to Tunefind, the following songs are featured in the episode:

A plea from the McMurrays

In search of a crew

Can we get back together?